The Scottish Chamber Orchestra Chorus, under the direction of Gregory Batsleer since 2009, has built a reputation as one of Scotland’s most vibrant and versatile choirs. Widely regarded as one of the finest orchestral choruses in the UK, it celebrates its 30th anniversary in 2021.

The Chorus also appears on its own in a cappella repertoire and its annual Christmas concerts have quickly established themselves as a Season highlight. Other recent out-of-Season appearances have included a critically-acclaimed debut at the BBC Proms in Handel’s Jephtha in August 2019; a dramatised performance of Parry’s Songs of Farewell in 2017, devised by stage director Jack Furness and Chorus Director Gregory Batsleer; and the world premiere of David Lang’s RPS Award-winning Memorial Ground at the 2016 East Neuk Festival.

SING WITH THE SCO CHORUS

The Chorus is made up of around 70 singers from all walks of life. Typically performing with around 50 singers, we meet regularly for rehearsals in central Edinburgh. New members are very welcome – to find out more, please contact our Chorus Manager.

The excerpts below are from the Scottish Chamber Orchestra & SCO Chorus'
BBC Proms 2019 performance of Handel's 'Jephtha' conducted by Richard Egarr.
Many thanks to BBC Proms and BBC Radio 3 for their permission.

Our Young Singers' Programme aims to nurture and develop aspiring young singers. It is designed for young people (aged 18 - 23) with a high level of singing/choral experience and ambitions to further their singing with a world-class ensemble.
Read more here. 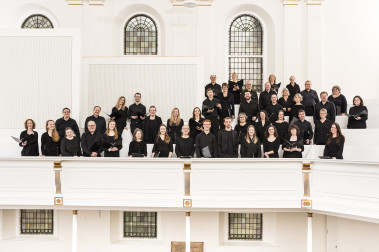 Enjoy the SCO Chorus' recent digital performance of Henry Purcell's Hear My Prayer, O Lord with a BSL interpretation of the choral anthem by Zoë McWhinney. Filmed at Greyfriars Kirk, Edinburgh, in 2021.

This is the sort of performance The Sixteen or the Tallis Scholars – both masters of this art – would have been delighted with, and that’s no exaggeration.

Thus the concert began and ended in a cloud of harmonies, tapping into the mystery of the season, and confirming again how capable the chorus are of turning this concert into something truly magical.

... stars of the show were the SCO Chorus ... with singing that was strongly defined, expertly balanced and joyfully buoyant...

... [SCO Chorus] really does set the gold standard for ensemble singing round these parts.

This has to be one of the best performances ever from an amateur choir... No doubt this splendid group's inspirational chorus master Gregory Batsleer is partly to thank.

Professional voices can be thrilling here but the humanity, expressiveness and energy of the SCO Chorus in the Scottish Chamber Orchestra's performance of Jephtha under the conductor and harpsichordist Richard Egarr was even more impactful.

The SCO Chorus, trained to within an inch of their life by Gregory Batsleer, sang this music with truth and thrilling conviction.

... a deeply rewarding, absorbing evening of music, immaculately judged in its shifting moods and perspectives, and one that provided – as Batsleer also said he hoped – a time for reflection amid the pre-Christmas hubbub. The SCO Chorus singers were on breathtaking form...