SCO Concerts & Projects Manager, Louisa Stanway, takes us backstage for an insight into the planning of a Digital Concert Series during a pandemic.

The challenges for the concerts department over the last year have been like no other in my almost 10 years with the SCO!

After the initial shut down, last summer was a mixed and unsettled period for planning within the Orchestra, but, by the autumn, we had devised a programme of a handful of full orchestral concerts alongside an extraordinarily wide-ranging chamber music programme.

The chamber music was largely devised by the players themselves and was aimed at allowing you, the audience, to develop a stronger relationship with them. It also allowed the players to use their considerable creative talents in a new way for the Orchestra.

All of this would have a been a major shift at the best of times, but, coupling this with the new guidelines we had to work within as a performing arts organisation, added a new dimension to the projects.

We had to consider very carefully how many players we had in a venue at any one time to ensure that distancing could be possible with the people present. This, of course, also guided what repertoire we were able to programme, but also meant that we had to be aware of capacities for spaces such as the toilets – the one benefit of not having an audience was that we had more toilet capacity for the players! We introduced a system of asking anyone who came into the venue a series of COVID questions to ensure everyone was as safe as possible.

By far the biggest change for us though was the substitution of the audience for camera and audio crews. We have recorded very little in full audio/visual (AV) form in my time at the SCO although, of course, we are very experienced at making audio-only recordings. Even with this experience, nothing prepares you or the players for the performance of a most glistening piece of Brahms, and then no applause to thank the players and celebrate afterwards.

We had made the general decision to run our days of recording with a rehearsal in the morning allowing the AV teams to prepare their shots and balance the sound, and then to have the afternoon as a recording of the ‘concert’. For the chamber music, this arrangement developed in response to some challenging programming during the year, and we ended up spreading the recording across a whole day.

By far the biggest change for us though, was the substitution of the audience for camera and audio crews

We hope in the autumn to be able to welcome audiences into our regular venues and will be working closely with our venues to ensure that we can provide a comfortable experience for everyone. We so look forward to welcoming you back soon! 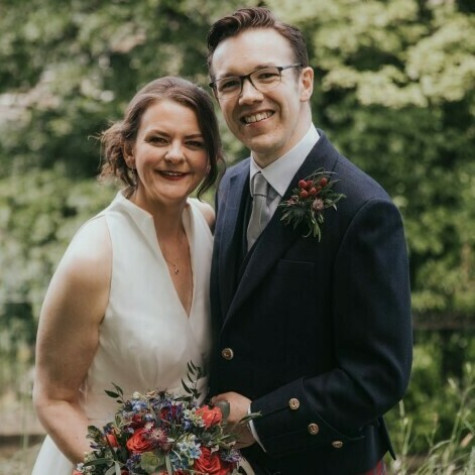 While navigating the challenges of planning a Digital Concert Series, Louisa was also busy organising her wedding and following a few rescheduled dates was finally able to get married in Edinburgh this June.

Congratulations to the newlyweds, Louisa and Andrew!