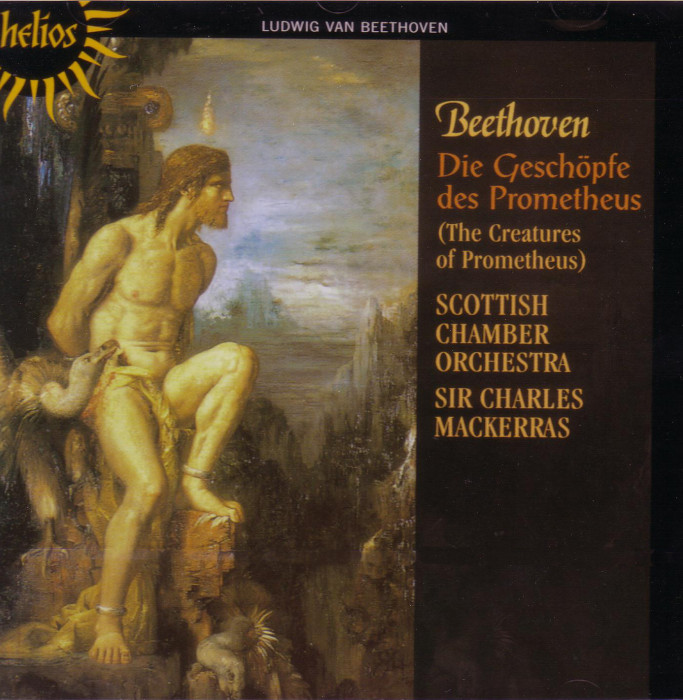 We will endeavour to post your CDs out to you as soon as possible.
However, due to the current situation, it may take up to five working days for these to be dispatched.
Please note that it is not currently possible to book international deliveries online, but please contact us on info@sco.org.uk if you would like to make an order from outside of the UK.

Beethoven composed his first ballet, Ritterballet (‘Ballet of the Knights’), in 1791 while he was in Bonn. This diversion, devised for Count Waldstein who claimed he himself had written it, is a modest achievement. Ten years later Beethoven was commissioned to provide the score for a more impressive concept, a ballet with mime on the subject of Prometheus. The action and choreography were the work of the celebrated Italian dancer and composer Salvatore Viganó (1769–1821), a pupil of Boccherini. (His ‘solo’ – track 17 – is the longest in the ballet and is in the most prominent place, before the grand Finale.)

During the reign of Emperor Leopold II, ballet had become a popular entertainment in Vienna through the pioneering efforts of the French dancer Jean-Georges Noverre (1727–1810) who had commissioned Les Petits Riens from Mozart in Paris in 1778. In his reforms, the over-elaborate Italian style had been replaced by a simpler, less extravagant form of dance which exploited the dramatic over the merely decorative.

No copy of the original programme for The Creatures of Prometheus has survived so the specific action intended for each musical item cannot be established, though a biography of Viganó by Carlo Ritorni tells us that in the introduction, ‘La Tempesta’, into which the overture runs without a break, ‘pursued by the violent anger of Heaven, which provides a pretext for a noisy musical prelude, Prometheus comes running through the wood to his two clay statues’. A handbill for the first performance in the Burgtheater in Vienna on 28 March 1801 provides the following synopsis:

This allegorical ballet is based on the myth of Prometheus. The Greek philosophers who knew him tell the story in the following manner: they depict Prometheus as a lofty spirit who, finding the human beings of his time in a state of ignorance, refined them through art and knowledge and gave them laws of right conduct. In accordance with this source, the ballet presents two animate statues who, by the power of harmony, are made susceptible to all the passions of human existence. Prometheus takes them to Parnassus to receive instruction from Apollo, god of the arts, who commands Amphion, Arion and Orpheus to teach them music, Melpomene and Thalia tragedy and comedy. Terpsichore aids Pan who introduces them to the Pastoral Dance which he has invented, and from Bacchus they learn his invention – the Heroic Dance.

Beethoven provided an overture and sixteen numbers, generally untitled except for tempo indications. Interesting features are Beethoven’s prominent scoring for the harp (an instrument which he rarely used) in the ‘Adagio — Andante quasi allegretto’, and passages for solo basset horn (the only time he wrote for the instrument) in the ‘Solo della Casentini’. Mlle Casentini (or Cassentini) was Beethoven’s prima ballerina. The ‘Solo di Gioia’ was for Gaetano Gioia – dancer, choreographer and mime, known as ‘the Sophocles of the Dance’.

A version of the main allegro theme (track 8) was used some years later in the first part of the overture to Die Weihe des Hauses (‘The Consecration of the House’), Op 124, and the grand Finale quotes two Contretänze (WoO14 Nos 7 and 11) as well as the theme later used for two separate sets of variations – Op 35 for piano and the last movement of the ‘Eroica’ Symphony.

Although the ballet was well received by the audience, with twenty-one further performances, not all were impressed by the music. A critic writing in the Viennese magazine Zeitung für die elegante Welt on 19 May 1801 commented:

The music did not completely come up to expectation, notwithstanding some uncommon virtues. Whether Herr van Beethoven can achieve what audiences such as those here demand with so uniform, not to say monotonous a subject, I leave undecided. There can scarcely be any doubt, however, that his writing here is too learned for a ballet, and pays too little regard to the dancing.

In combining three Classical myths – Pygmalion, who brings a statue to life, Orpheus the godlike musician, and Prometheus the bringer of fire – the ballet is an allegorical representation of man’s place in the universe. Beethoven may have considered it a secular counterpart to Haydn’s oratorio The Creation which he had much admired at its premiere in 1798.

Some years later, Beethoven wrote that music should strike fire from a man. He added: ‘Music is a higher revelation than all wisdom and philosophy; it is the wine of a new procreation and I am Bacchus who presses out this glorious wine for men and makes them drunk with the spirit.’

Did Beethoven see himself in the portrayal of Prometheus, the bringer of spiritual fire to man? The music for The Creatures of Prometheus marked a turning point in Beethoven’s career as the Classical period gave way to the age of Romanticism. The ‘Eroica’ Symphony (1803), the opera Fidelio (1805), and the Violin Concerto (1806) all belong to the new world that he began to explore after completing the ballet.

Until the end of the eighteenth century composers had been musicians in the service of the nobility, fulfilling duties for church and court. After he left Bonn in 1792, Beethoven never held a permanent musical appointment. He became one of the first successful freelance musicians, relying upon commissions but not employed by any wealthy patron.

His deafness set him apart from society and his genius made him different from his fellow beings. After Beethoven’s time, the composer became an independent creator, a law unto himself, regarded by many as godlike, superhuman, existing on a plane above mere mortals – a Promethean giant. 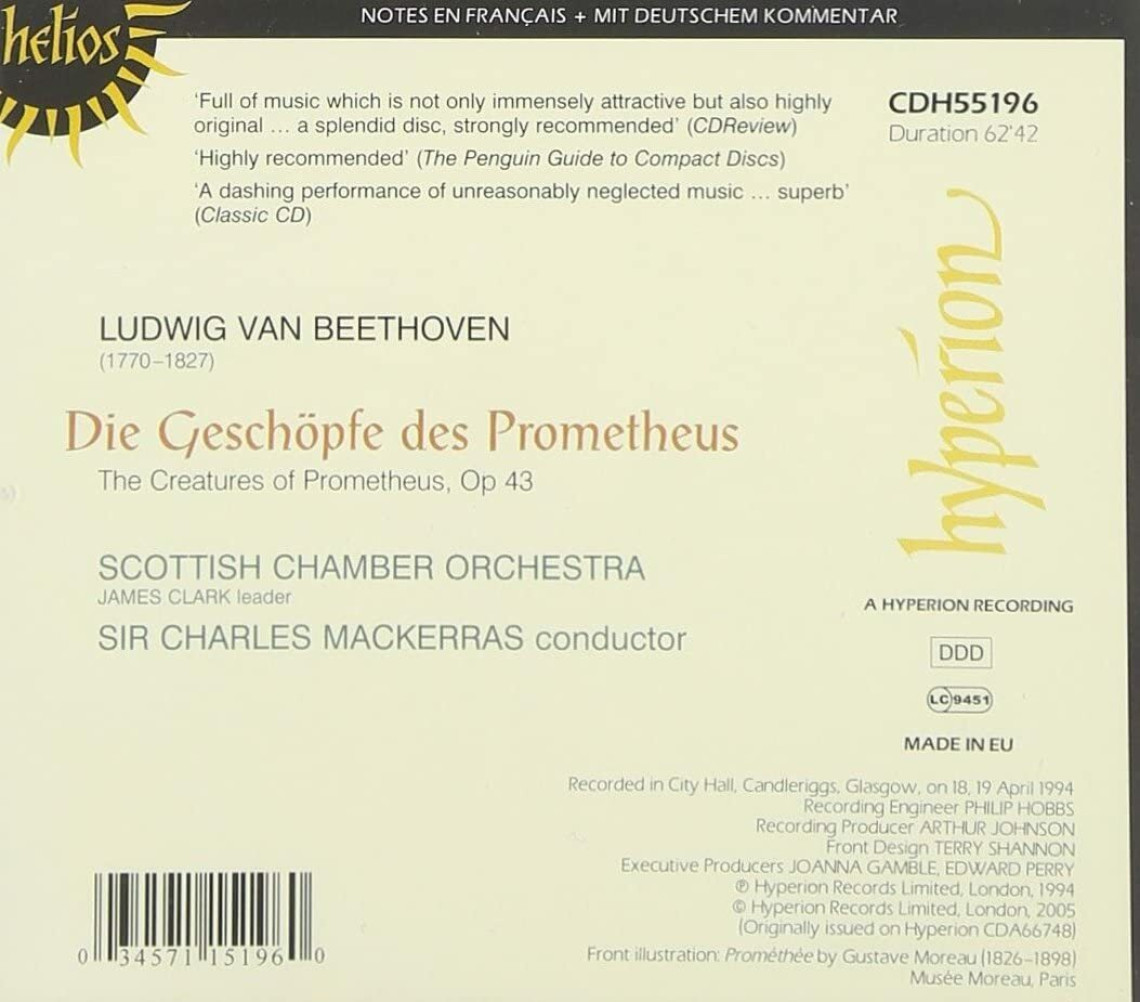