Yeol Eum Son’s graceful and timeless interpretations, crystalline touch and versatile, thrilling performances have caught the attention of audiences worldwide. She is highly regarded as a brilliant virtuoso whose playing has a rare balance between enormous kinetic energy and substantial gravity. Yeol Eum performs all over the world as a recitalist and soloist with orchestras. An avid chamber musician, in 2018 Yeol Eum was appointed Artistic Director of Music in PyeongChang Festival, being responsible for programming both summer and winter editions at the Olympic site in PyeongChang.

Earlier in the year, Yeol Eum made concerti debut at the Salle Philharmonique de Liège with Liège Philharmonic; Philharmonie de Paris debut with Orchestre National d’Île-de-France and a debut with Spanish Radio and Television Symphony Orchestra at Madrid’s Teatro Monumental. Across the 21/22 season, Yeol Eum looks forward to making debut with the Budapest Festival Orchestra at Palace of Arts in Budapest; Amsterdam’s Concertgebouw and Eindhoven’s Muziekgebouw Frits Philips debut with Philharmonie Zuid Nederland; Finnish debut with Helsinki Philharmonic at the Helsinki Music Centre; Singapore debut at the Victoria Concert Hall with Singapore Symphony; debuts with Basel, Norrköping and Castilla y León Symphony Orchestras, Szczecin Philharmonic and Württemberg Chamber Orchestra Heilbronn among others. In the 21/22 season, Yeol Eum also returns to Deutsche Radio Philharmonie Saarbrücken for multiple performances under the baton of their Chief, Pietari Inkinen.

Distinguished highlights of the recent concert seasons in the United Kingdom include Yeol Eum’s Royal Albert Hall and BBC Proms debut with the BBC Philharmonic in summer 2019 (Mozart’s Piano Concerto No 15); CBSO debut in Birmingham (Mozart’s Piano Concerto No 21) and at London’s Cadogan Hall with the Academy of St. Martin in the Fields (Mozart’s Piano Concerti No’s 8 & 21). Her London debut coincided with an Onyx CD release of a highly acclaimed all-Mozart recording featuring Mozart’s Piano Concerto No.21 with the Academy of St Martin in the Fields under Sir Neville Marriner for whom it was the very last recording. According to The Times, “Yeol Eum Son is a model of clarity and fleetness” whilst Gramophone called the recording “an uncommonly fine Mozartian debut”. Shortly before the global pandemic, Yeol Eum’s debut at Liverpool’s Philharmonic Hall with the Liverpool Philharmonic (Beethoven’s Emperor Concerto) was met with high acclaim for which Johanna Roberts wrote: “Yeol Eum Son throughout demonstrated the technical excellence partnered with lyrical sensitivity that have made her one of the most sought-after concert pianists in a virtuoso performance that was much appreciated by the audience”. During her UK tour with the Iceland Symphony Orchestra in spring 2020, Yeol Eum returned to London’s Cadogan Hall and debuted at Edinburgh’s Usher Hall and at Basingstoke’s the Anvil Concert Hall interpreting Ravel’s Piano Concerto for the Left Hand.

A sensitive, emotional and powerful recitalist, amongst Yeol Eum’s recent recital highlights are debuts and re-invitations at Porto’s Casa da Música, Belgrade’s Kolarac Concert Hall, Estonia’s Concert Hall within Tallinn Piano Festival, the Lithuanian National Philharmonic Hall, Helsingborg Piano Festival, International Piano Series Fribourg, Luzerne’s KKLSaal, Istanbul Recitalleri, Moscow’s House of Music, Welsh debut at the Royal Welsh College of Music and Drama, the San Francisco Chamber Music Society, the Phillips Collection in Washington DC and Scottish recital debut at the East Neuk Festival for which The Scotsman praises Yeol Eum for having found “that vital emotional connection with the music and physically embracing its raw energy and dynamic extremes with ferocious virtuosity”. In the 21/22 season, Yeol Eum makes her recital debuts at the Concertgebouw in Amsterdam, Nieuwe Kerk in The Hague and returns to Oregon’s OSU Piano International Steinway Series as well as to Steinway Society Bay Area recital series. As a chamber musician, in the 21/22 season, Yeol Eum looks forward to collaborations with Quatuor Modigliani at the Haus der Musik Innsbruck as well as with the Belcea Quartet at Gare du Nord in Basel.

Yeol Eum’s most recent recital recordings include an all- Kapustin Onyx release (2021) marking a year since the composer’s death and celebrating his remarkable contribution to the piano repertoire; a Schumann focused release on Onyx (2020) featuring Fantasy in C – Kreisleriana – Arabesque; and a DECCA release (2016) entitled Modern Times, featuring solo piano music written between 1910-1920 by Berg, Prokofiev, Stravinsky and Ravel.

Yeol Eum is Honorary Ambassador of the Seoul Arts Center and her home city of Wonju. A double Second Prize winner of the Tchaikovsky International Piano Competition in 2011 and at the 13th Van Cliburn International Piano Competition in 2009, she was a student of Arie Vardi at the Hochschule für Musik Theater und Medien Hannover in Germany. She holds a degree from the Korean National University of Arts. 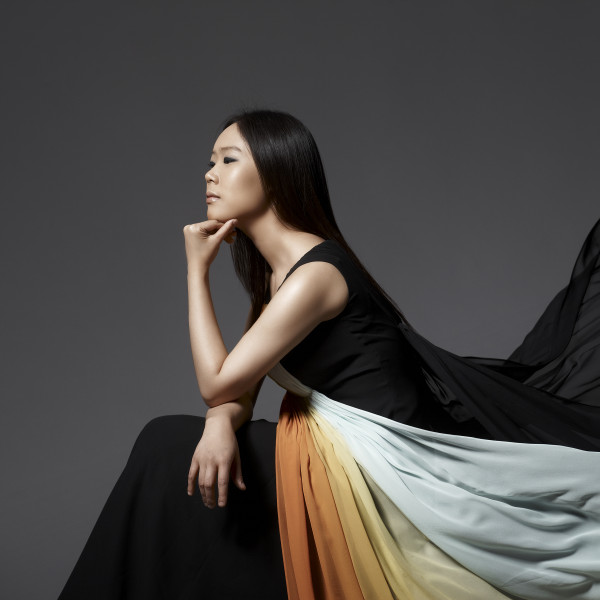