Hailing from Ulverston in Cumbria, Jess Gillam is animating the music world with her outstanding talent and infectious personality, bringing classical music to new audiences through both her world class live performances and her work on television and radio.

After performing at the prestigious Last Night of the Proms in 2018 and having her performance described as “the indisputable highlight” by BBC News, Jess continues to grow her international career. Highlights of the 19/20 season include performing with the BBC Scottish Symphony Orchestra as part of the Last Night of the BBC Proms Japan and New Year concerts with Osmo Vänskä and the Minnesota Orchestra.

This 20/21 season, she will perform across the world with leading orchestras such as The Halle, National Youth Orchestra of Great Britain, Royal Philharmonic Orchestra, Scottish Chamber Orchestra, Brno Philharmonic, and Tonhalle-Orchester Zürich. Jess also embarks upon her first US Recital Tour and will perform in many major cities on the East coast including the Lincoln Center in New York, in Boston, Washington, Princeton and Waterford. She is also a European Concert Halls Organisation (ECHO) Rising Star which, each year, gives Europe’s brightest young musical talent an international platform.

Passionate about collaborating and exploring the versatility and dynamism of the saxophone, Jess will also launch her latest project – a tour with the ‘Jess Gillam Ensemble’: a dynamic group of close friends performing an electrifying range of music!

Jess is the first ever saxophonist to be signed to Decca Classics and her debut album “Rise” shot to No.1 in the Official UK Classical Charts. Featuring a selection of her favourite pieces ranging from Marcello and Shostakovich to David Bowie and Kate Bush, it was highly celebrated and received rave reviews and was featured in The Times Top 100 albums of 2019.

Jess has been the recipient of a Classic BRIT Award (in the Sound of Classical Poll), was the first ever saxophonist to reach the final of BBC Young Musician, and in 2019, performed live at the BAFTAs (British Academy of Film and Television Awards) to millions of viewers at home.

She is also a presenter on TV and Radio. She became the youngest ever presenter for BBC Radio 3 and hosts her own weekly show called “This Classical Life” in which she talks to musical friends and colleagues about the music that inspires them. The show is in its second year now and in 2020 has been awarded the prestigious ARIA Award for Best Specialist Music Show. It has been very well received by audiences and critics alike, with The Guardian stating “there are many more established presenters who lack Gillam’s warmth and impressive ability”. In 2019 she also presented five BBC Proms on television alongside Katie Derham and Tom Service.

A free spirit in style and character, Jess is a passionate advocate for the power of music in society, often combining her concert engagements with educational and social projects. She is a patron for Awards for Young Musicians and a trustee for the newly formed HarrisonParrott Foundation, working towards full inclusivity of all ethnicities, genders, disabilities and social backgrounds with equal access to the arts.

She is a Vandoren UK Artist and became the youngest ever endorsee for Yanagisawa Saxophones aged just 13. She is a lover of live music and continues to promote her own concert series, bringing international talent to her hometown of Ulverston. 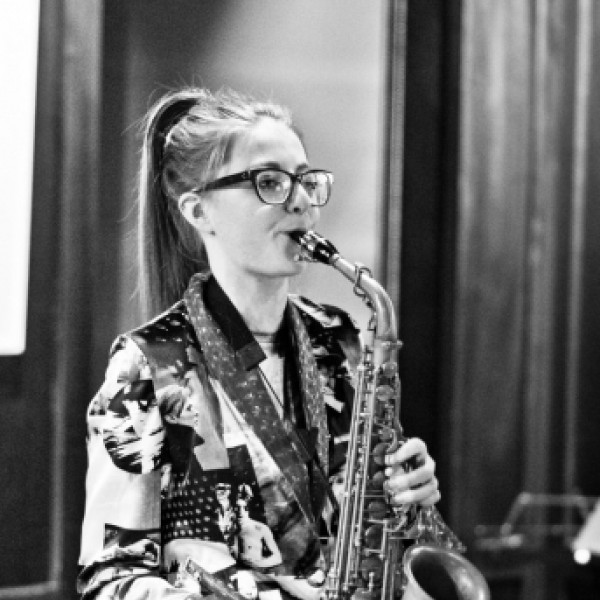