Following the release of our box-set Sir Charles Mackerras Conducts Mozart, we asked our Sub-Principal Double Bass Adrian Bornet to share some of his memories of working with Sir Charles.

The joy of working with Sir Charles was his infectious enthusiasm, and from the moment he walked on stage there was a guarantee of good things ahead. It was obvious he had a great knowledge built up over many years of the works we were to record, but there was also a collaborative atmosphere. His excitement was palpable should a different idea from his own thoughts be presented (not so much tempi and interpretation as articulation and bowing), he would always try it out and happily embrace if we all felt good about it. This adaptability and rapid response made us all feel very much part of the musical process.

It was obvious he had a great knowledge built up over many years of the works we were to record, but there was also a collaborative atmosphere

His professional approach to recording was worthy of emulation, always keeping a careful check on tempi so that, should we need to return on another day to re-record, he had an accurate account of our speed, thus never wasting time. A planned rehearsal order was also crucial so as not to over-exert singers and soloists.

The nine Mozart symphonies in this collection were recorded in the ideal space and acoustic of the Glasgow City Halls over a period of fourteen days, the earlier ones in 2007 and the numbers 38-41 in 2009 with half days occasionally free. That we all retained enthusiasm, momentum, quality and energy was in large measure down to his highly developed sense of using every moment wisely so as not to waste our collective concentration.

Were I to choose any work of the five CDs, from the emotion of the Requiem to the virulence of No 41, it would probably be that last symphony, for its grandeur, variety and with a final repeat, its unbridled joy. 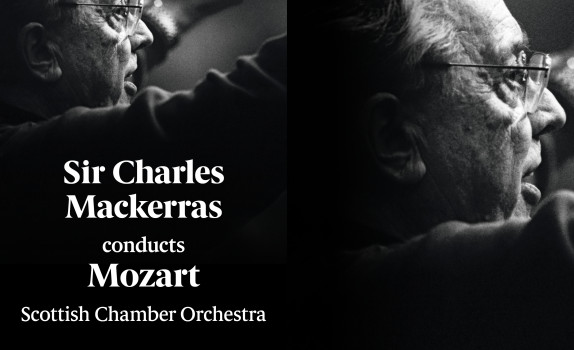 ﻿The collection is now available to buy as a CD for home delivery via our online shop.