Greg Lawson is a violinist, composer and conductor who has explored music from many genres.

He studied violin at the Royal Northern College of Music with Malcolm Layfield and Eligh Goren and in West Berlin with Ilan Gronich.

As a classical violinist he has held principal and Leading positions in most of the orchestras in Scotland, Co-Leader Scottish Ballet, Member of the Scottish Ensemble, Assistant Leader of the Orchestra of Scottish Opera, Principal Violin Scottish Chamber Orchestra, The Paragon Ensemble and Principal 2nd Violin in the BBC SSO. He has also been a regular player with the John Wilson Orchestra and the World Orchestra for Peace.

Greg has worked in many other musical fields. He was Musical Director for Communicado Theatre Company’s production of Carmen, composing the music and acting in the play and for many years a member of Mr McFall’s Chamber, a group who explored many genres including tango and the music of Astor Piazzola. From the experience of this group, he met the singer Valentina Montoya Martinez and joined her tango group Que Tangazo and from this group emerged “The magnificent genre bending world folk quintet Moishe's Bagel”.

He has arranged string and orchestral scores for many bands and musicians, including The Delgados, Mugwai, The Trashcan Sinatras, Karine Polwart, Kate Rusby, Eddie Reader, Heidi Talbot, Karen Matheson, James Grant, Donald Shaw, Echo and the Bunnymen, Phil Cunningham, the BBC SSO and the RSNO.

As a conductor he has worked with both the RSNO and The Orchestra of Scottish Opera on commercial recording projects for composer Malcolm Lindsey and the BBC SSO for the BBC Scotland television programme, Scotland’s Music.

In 2015 he realised Martyn Bennett’s album GRIT for orchestra for the opening night of Celtic Connections. He formed and conducted an orchestra made up of musicians from each musical discipline – classical, jazz and folk – that represents the whole musical community in Scotland. In 2016, The Grit Orchestra took GRIT to both WOMAD and the Edinburgh International Festival. GRIT was BBC BAFTA nominated and won The Scottish Trad award for event of the year 2015.

In 2018 he was commissioned by Celtic Connections to realise Martyn Bennett’s album Bothy Culture for a performance at The Hydro for The Grit Orchestra with Danny MacAskill and ariel dancers in an event called Bothy Culture and Beyond.

Following on from the success of that performance to 8,000 people The Grit Orchestra was invited back to the Edinburgh International Festival 2018 to perform Bothy Culture for which the orchestra received a Herald Angels award and Scottish Awards for New Music for Innovation in New Traditional Music.

The long-term aim of The Grit Orchestra is to offer an opportunity for the musicians in Scotland from folk, jazz and classical backgrounds to write for an orchestra that is made up of musicians representing those different genres and to explore new educational possibilities for children of all backgrounds.

In 2018 he completed a BBC Radio 2 commission called Ballads of the Great War for the centenary of the Armistice. He arranged 12 new folk songs commissioned by John Leonard for the BBC Philharmonic, conducting them in a live radio broadcast on 9 November 2018.

He teaches at the Royal Conservatoire of Scotland in both the Classical School and the Traditional School and, with others, is building awareness and projects between departments to share the differing knowledge of musical forms. To this end, Moishe’s Bagel have just been appointed as Associate Artists at RCS and run a course in Music and Performance.

The Grit Orchestra commissioned six musicians from within the orchestra to write collaboratively in a celebration of The Declaration of Arbroath. The subsequent piece was performed at the opening night of Celtic Connections 2020. It was the first time an orchestra has written its own music and the ongoing commitment of The Grit Orchestra is to create a regular forum of composition combining the different genres of classical, jazz and traditional. The Declaration received the Scottish Award for New Music 2021.

In the summer of 2020 Greg was commissioned by the Scottish Chamber Orchestra to write a piece about the environment for COP26. The piece is called Symbiosis and is for 24 individual strings and was premiered online on 31 October 2021 to coincide with the start of the conference. 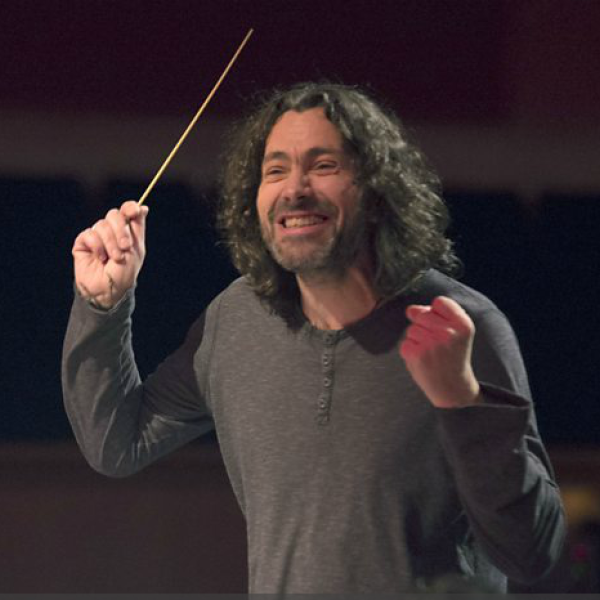