"A stunning performance... Alec Frank-Gemmill made the instrument dart, wail and flutter as if those were normal things for a French horn to do". (The Herald)

"I especially enjoyed Alec Frank-Gemmill's cheeky handling of the runs and decorations in the Horn Concertino." (Gramophone)

Alec Frank-Gemmill divides his time between concertos, recitals, chamber music and orchestral playing. He was a member of the BBC New Generation Artists scheme 2014-16, appearing as soloist with the BBC orchestras on numerous occasions, including in performances of rarely-heard repertoire by Ethel Smyth, Malcolm Arnold and Charles Koechlin. He is a regular soloist with the Scottish Chamber Orchestra, performing concertos by Mozart (on the natural horn) with Richard Egarr, Ligeti and Strauss with Robin Ticciati, and Schumann with John Eliot Gardiner. In 2017 Alec gave the premiere of James Macmillan's Concertino for Horn, conducted by Andrew Manze.

Often invited as a guest principal horn, Alec has frequently appeared with the Royal Concertgebouw Orchestra, London Symphony Orchestra and Chamber Orchestra of Europe. He also performs as part of period-instrument groups, most notably with Ensemble Marsyas. Their latest album “Edinburgh 1742: Barsanti & Handel” was critically acclaimed and singled out for its solo horn playing. Alec is the recipient of a Borletti-Buitoni Fellowship, which enabled him to make two recordings for the BIS label: a disc of 19th Century works for horn and piano with Alasdair Beatson, and baroque concertos with the Swedish Chamber Orchestra conducted by Nicholas McGegan. Both albums have been highly praised in the press.

Alec is Professor of Horn at the Guildhall School of Music and Drama in London, his alma mater. He also studied in Cambridge, Zürich and Berlin with teachers including Hugh Seenan, Radovan Vlatković and Marie-Luise Neunecker. 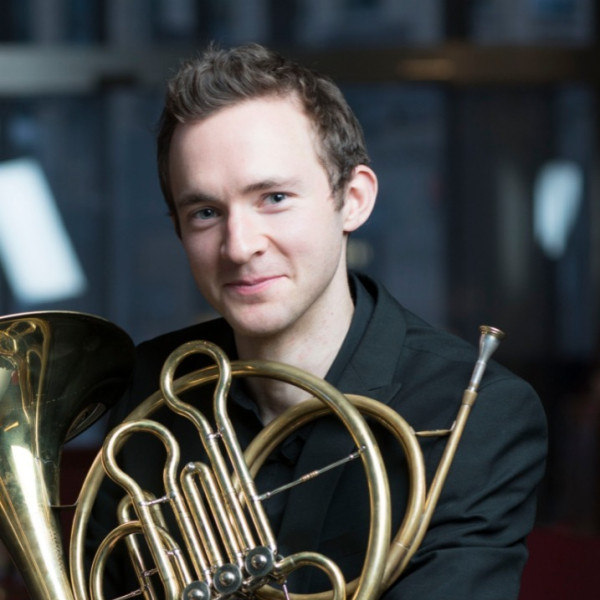 a wonderfully characterful account of Schumann's Adagio and Allegro, with phrasing and tonal control so evocative that it made me sit up and take note. The Scotsman